The French Bulldog is a small companion breed of dog. The name indicates that France is the country of origin, but the Americans and British may have played a larger part in development of the breed. The breed is commonly called the Frenchie. Also known as "clowns" and frog dogs.

While theories abound about the exact origin of the French Bulldog, the most prevalent opinion is that around the mid-1800s Normandy lace workers from England took smaller bulldogs with them when they sought work in France. In the farming communities north of France that the lace workers settled in, the little bulldogs became very popular as ratters and loyal family companions and their population began to swell. These little bulldogs were in fact "culls" of the established bulldog breeders in England, who were generally more than happy to sell these undersized examples of their breed to fanciers of the "new" breed in England. This was especially true of the "tulip" eared puppies that cropped up at times in bulldog litters. French bulldogs were originally bred as ratters, but are now bred as lap dogs and companions. The magazine "Country Life", in the 29 April 1899 takes up the story: "Some five-and-thirty years ago in fact, [i.e. about 1865], the small-sized or light-weight Bulldog was common in this country; so much so that dogs of the breed that scaled over 28lbs were not encouraged at such shows as Birmingham, which was at that period the most important exhibition of its kind in England. Then by some freak of fashion the Toy Bulldog became all the rage in Paris, with the result that the celebrated Bill George, of Canine Castle, Kensal New Town, the most eminent dog dealer of his or any other day, received carte blanche commissions from French customers to procure them light-weight Bulldogs, and by this means England was denuded of all the best specimens"[1]. 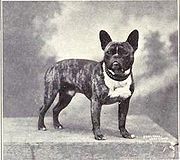 French Bulldog circa 1915 As the new, smaller bulldogs gained popularity in France, they became favorites of the Parisian "Belles De Nuit" - the street walkers. One reason for this is that when strolled, the exotic looking dogs brought attention to their owner, and gave potential customers a legitimate reason to chat with her. Another is that the docile breed was content to nap for short stretches when brought to hotel rooms, without making a fuss. Breed historians can still sometimes turn up notorious "French Postcards" bearing images of scantily clad French prostitutes posing with their little "Bouledogues Français". The aura of notoriety that ownership of the little dogs conveyed made them a fashionable way for the well-to-do classes to show off how daring they could be, and they soon became favorites of the "artistic" set across Europe. Photos dating to around this time show the Russian royal family posing alongside their French bulldogs, and they imported several of the little dogs from France. Other famous fanciers included Toulouse-Lautrec, the author Colette and King Edward VII. A French bulldog, insured for the, at that time, astronomical sum of $750, was on board the ill-fated Titanic. It is inarguable that without the influence of dedicated, turn-of-the-century American fanciers the breed would not be what it is today. It is they that organized the very first French bulldog club in the world, and it was they who insisted that the "bat" ear so associated with the breed today was correct. Until that time, French bulldogs were shown with either the "bat" or "rose" ear. All in all, French bulldogs are an international breed, with breeders of many nations being responsible for the creation of the dogs we know today.